World Cup qualifying 2014: Mexico Prepares for Honduras and the USA

The World Cup Qualifiers return and Mexico needs to recuperate the excellent form shown in the last two years. El Tri makes a trip to Honduras and return to Mexico to host Jürgen Klinsmann's United States.

Share All sharing options for: World Cup qualifying 2014: Mexico Prepares for Honduras and the USA

After the 1-1 against Jamaica at Estadio Azteca, the red sirens could be perceived from various directions. Jamaica with a tad bit more of luck could of taken a historic victory from Mexico City, while Francisco Javier “El Maza” Rodríguez decided to offset a hyperactive fan by deriding him with an inappropriate gesture. Maza’s captaincy situation is put into question come the Honduras game at San Pedro Sula and the United States match at Estadio Azteca.

Contrary to the first Hexagonal match against Jamaica, Mexico will have about a week to prepare the anticipated Honduras match. A day after the unexpected tie, Honduras manager, Luis Suarez said in the radio show ESPN RadioFormula that Chepo’s team will be even more dangerous come the March 22nd game.

“It will be much tougher against Mexico because they will correct some mistakes for the next game against us. If I thought the match would be complicated, now I think it will be much more,” declared the former Ecuador manager.

Mexico will receive a Guillermo Ochoa who shut down the PSG and Olympique de Marseille attacks to zero goals. The Parisian team is first place, while the team that Zinedine Zidane supported growing up is second place.

In the game against Jamaica, Paul Aguilar received the shot to take over as right back. His games with America, which plays with a defensive line of five, as opposed to a line of four as Chepo and his staff use, exposed Aguilar. Severo Meza, who saw the match from the bench, got a call up, while the Club America defender was forgotten. Severo has his golden moment with el TRI.

Another Rayados player, Jesús Závala returns to a Mexico call-up after recovering from an injury he sustained in 2012. Závala is a player that has consolidated under Chepo’s guidance and is in pole position to start in San Pedro Sula.

On attack, the question persists, will Chepo de la Torre go with two strikers? Javier “Chicharito” Hernández is a definite starter, but with the Peralta injury will Chepo give the opportunity to a resuscitated Omar Bravo, or a rookie Raúl Jiménez?

Giovani dos Santos will arrive to Mexico as the player in best form from the European legion. It took him more than half a season to recover the genius in him and wow the football spectator. His ability to score and passing has exponentially improved in the last month. Playing Giovani behind Chicharito seems like the best option for the Honduras and the United States game.

The players required to generate the game from the wings will fall on the boots of two players who are playing in Spain’s Comunidad Valenciana, Andrés Guardado and Javier Aquino. Guardado has recently been dropped off Valencia CFs starting eleven, but his experience positions him as a starter. Aquino, whose role is ascending with Villarreal CF, will play on the right wing. The tandem Guardado-Torres Nilo is familiarized, while the Severo-Aquino tandem needs more minutes together to strengthen and become a force to Chepo’s team.

With these notes in mind, Chepo de la Torre’s possible line-up could possibly look as follows: 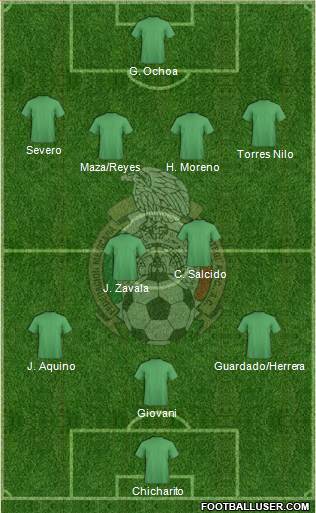 Ochoa’s excellent start to 2013 should be enough to give him a shot to start one of these important Hexagonal games. Guardado’s starting spot is not completely his, and an alternative could be Pachuca’s star midfielder Héctor Herrera. And last, will there be a type of sanction to Maza? Because if in fact he does not start, Diego Reyes could get his first slice of Hexagonal play.