Yesterday the Clausura 2012 awards were celebrated at the Auditorio Plaza Condesa in México City.

Chema Basanta said, "I want to share this with my teammate Hiram Mier, the board, and specially my dad. Thank you all so much".

José de Jesús Corona won the award for the best Goalkeeper. He congratulated all the nominees and thanked his family.

Afterwards the hosts Francisco Javier González and Jorge Sánchez congratulated the youth tournament champions: Monterrey U 13 champions, Pachuca U 15, Guadalajara U 17, and América U 20 (Hell yeah!, the young aguilas have won the tournament 4 times in a row now).

The awards celebration continued with the award for the 2012 Clausura's top goalscorers, Iván Alonso and Christian Benítez. Alonso said, "I want to thank professor Héctor Eugui who trusted in me, my family because without them it would've been impossible, and last, to let you know that I haven't given up, I still dream and hope to keep playing football". Grande Iván Alonso. Hopefully he is now healthy and keeps playing football. Tu puedes campeon!. Shame on Toluca's board for not supporting Iván Alonso.

The best attacking midfielder award was Lucas Lobos who said it was a privilege to be nominated with his professional teammates Daniel Ludueña and Christian Giménez (really?, wasn't Chaco injured for most of the time last tournament?). Next, Marvin Torrentera was awarded as the best assistant referee.

Afterwards, Iván Estrada was awarded as the best right back. Guti said, "Good night everyone, I want to thank God, the whole Santos Laguna family, they're awesome teammates on the pitch and my family who is the motor that keeps me going". Not sure if Guti was truly the best RB of last tournament. Severo Meza and Jorge Torres Nilo both had an outstanding season as well.

The Superlider Santos Laguna was acknowledged. Captain Oswaldo Sánchez received the award, and mentioned that they managed to be champions after all the finals they lost based on hard work and team work.

Next it was the youngsters turn to be awarded. Marco Bueno from Pachuca and 2011 U 17 World champion was named as the Clausura 2012 best rookie. After receiving his award Bueno said, " Many thanks, I want to thank my club for giving me the opportunity to debut, for all the support they give me, to my parents who are always there for me. It's a very exciting and emotive feeling. I want to congratulate my U 20 national team teammates."

why the hell you don't give the kid playing time Ego?, he needs to play! 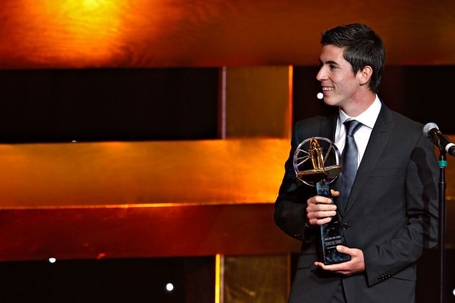 Then Juan Pablo Rodríguez was awarded as the best defensive midfielder. Chatite Rodríguez said, "I want to thank everyone who voted for me, I dedicate this for the board, mi teammates, the utility men, the doctors, who are behind of us. I want to thank my family so much too".

Luis Otavio Duarte was awarded as the best fitness coach.

As time passed the award for the best forward of the 2012 Clausura arrived. Oribe Peralta won the award. El Cepillo said, "I want to thank my wife, my kids, my teammates, and the great institution that Santos Laguna is".

Then Roberto García Orozco was awarded as the tournament's referee. García Orozco represented México at the London Olympic games.

Next it was the coaches turn to be awarded. Benjamín Galindo was named as the Clausura 2012 best coach. He said," This a great time of happiness, I've fought so hard too many years for this, I had the best in front of me and I learned from them. I don't the other nominees like rivals, I see them like role models and I wish them the best. I share this award with my family."

One of the most emotive moments of the ceremony was the acknowledgment of two greats sporting commentators: Don Ángel Fernández y Don Fernando Marcos. Another sports commentator, Jorge "Che" Ventura who knew and work with them said, "Don Fernando was an authority in the sports subject, a man of football, he was everything in this sport, controversial by essence and resources, permanently orientated by his vast culture; the other marked a before and after, with particular styles, he baptized football as the man game, he illuminated it with phrases like: "Those of you who like and love football", he was a charitable and charismatic person like no other".

Just before the end of the ceremony, there was the time to applause them once again, the heroes of this time and way before, the unforgettable Mexican Olympic champions. Onto the stage were: Jesús Corona, Darvin Chávez, Oribe Peralta e Hiram Mier, accompanied by Justino Compeán, President of the Federación Mexicana de Fútbol; Luis Fernando Tena, Head coach; and Héctor González Iñárritu, General director of the Selecciones Nacionales.

The Olympic champions were awarded with a diploma. Decio de María Serrano president of the Liga MX, acknowledged and awarded the Federación Mexicana de Fútbol for it's 85th anniversary. Justino Compeán at the time of receiving it said: " I've had this great privilege, this great honor, it was 6th years now that there was a team that is continuing and keeps working working with dedication for the Federación Mexicana de Fútbol and shares this 85 years".

Meanwhile, Luis Fernando Tena said: "Thank all of you, la Federación, José Manuel de la Torre for thrusting in us for this project, a coaching staff very wide in quality and quantity. Especially the most important ones, the players who gave their life in each ball. A dedication for my wife, my sons and my mother, thank you so much".

To conclude the Liga MX tribute for the London champions, Héctor González Iñárritu said, "Thanks Liga MX, the players, the clubs, the coaches, they're doing a great job with the youth teams, we're privileged because we pick up the work you do. We're having now more high standards, always with values, respect and discipline. Thank you."

The ceremony came to an end with the award for Oribe Peralta chosen as the Clausura 2012 best player. "Cepillo" went onto the scenario once again and thanked the distinction. The assistants chose it that way, he was vital for Santos championship. 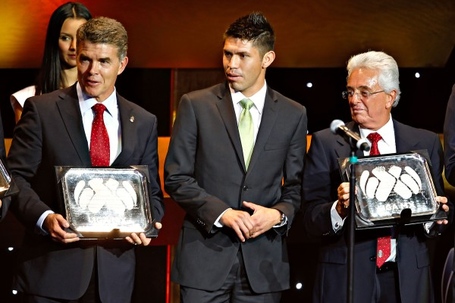 And to close the ceremony, the whole Lagunero club went on to receive the applauses of the Mexican football family. Standing, the Guerreros were acknowledged with their crown. Their president Alejandro Irarragorri took the time to thank all the "17 teams who help them become better each and every game".

The ceremony ended, not without first that the Campaña Rosa en favor de la concientización y prevención del Cáncer de Mama is going to be back. The pink ball is going to be used once again, Mexican football is going to use that color the month of October as it is already a tradition and always a responsibility the football of our country.