It wasn't a great weekend for travelers. Home teams were undefeated this week (albeit with only three wins). With this in mind (and/or laziness), I stayed close to home and went with the torta stand closest to my apartment. It's not the best quality but it gets the job done. Again, much like the home teams.
Sandwiched between last week's results and next week's predictions are hopefully some tasty bits. Don't forget to click on the header links and enjoy. 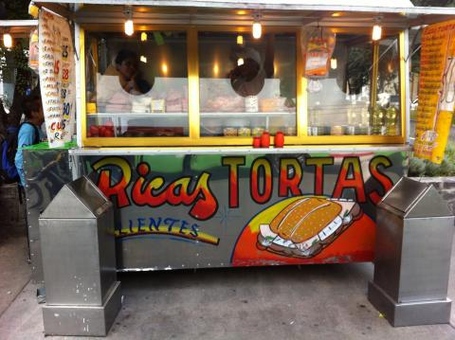 Puebla 1 - 1 Leon ... Not a ton of action in this one. Edgar Hernandez let in a pretty soft goal to give Puebla the equalizer in the 67th minute.

Morelia 1 - 1 Tigres ... Morelia were probably the better team on the day, but scoring on Tigres never comes easy.

Cruz Azul 1 - 1 America ... Cruz Azul played pretty well in this one; America not so much. Leaving Chucho Benitez with acres of space to work can level things pretty quickly.

Monterrey 3 - 2 Queretaro ... Monterrey were dangerously close to failing to get three points from a home matchup with relegation-bound Queretaro. The Rayados could normally turn it on when they need to. Although, I wouldn't count on it this season.

Santos 0 - 0 Chiapas ... Probably should have been some goals here, but the collection of shots madeApe Lincoln look like a good finish.

San Luis 1 - 0 Pachuca ... Verdict still out on the Hugo Sanchez project. Not exactly a resumé match, this one.

Tijuana 1 - 1 Atlas ... Tijuana amassed twenty-three shots but equaled Atlas in quality chances. Whether on the road or at home, it's never easy to score on Atlas.

Toluca 1- 0 Atlante ... Atlante did not look good on Sunday. Toluca could/should have scored a few more.

Chivas 0 - 0 Pumas ... A pretty entertaining scoreless draw. Plenty of solid scoring opportunities and plenty of botched chances ... the most notable being Luis Perez hitting the post on a stoppage time penalty for Chivas.

Who's the big winner?: Anti-soccer blowhards

This week's nine games combined for a total of fifteen goals. A third of those came from the Monterrey-Queretaro match. That leaves ten goals for the remaining eight matches. Six of the nine games ended in a draw. So, there was a bunch of low scoring ties. Not exactly winning over soccer converts this weekend. Ridiculous soccer bashers in the States love to use the lack of goals as a symptom of the inferiority of the sport (if they even consider it one). Not to mention the disdain that so many have for draws. This weekend's Liga MX results provided them with plenty of ammunition. Luckily, the chances that soccer haters are paying attention to anything that is going in Mexico are pretty slim.

Prior to this match, I would have bet my left arm (it's just for show anyway) that Atlas would be unable to score in the Estadio Caliente (in the hopes of winning a third arm, of course). Mancilla's goal was not only a surprise due to the matchup, but the sheer improbability of this shot finding its way to the net. Mancilla was absolutely surrounded by a posse of Tijuana defenders. Yet, somehow he nicked the ball through the forest of Xolos and past, the on fire, Cirilo Saucedo. This was only the second goal scored by an opponent in Tijuana this season. Hats off to Mancilla.

Take dead aim on the rich ones. Get them in the cross hairs, and take them down: San Luis over Pachuca

Is this the best speech ever? I'd say it's top five for sure. San Luis likely agrees. Grupo Pachuca, owner of both Pachuca and Leon, spent some serious cash this summer. Leon, making the jump to Liga MX, were infused with new signings to bolster the roster. Pachuca was probably the biggest spender this offseason. They brought in expensive signings that they probably didn't need while signing a manager who commands a huge salary. Meanwhile their super-talented youth products are having a harder time getting on the pitch. They have all the makings of a team that spends simply because they can. Not to mention the richest man in the world just bought a 30% stake in the company.

San Luis doesn't quite have the same spending power. They are currently fighting off relegation using a collection of cast-offs and has-beens. While Pachuca splashed the cash this summer, San Luis secured as many loan deals as they could to fill out the squad. Their duct-taped roster continues to get the job done, however. Now with two straight wins over Pumas and Pachuca, San Luis are distancing themselves from the bottom of the table. It won't be getting any easier for them this coming weekend, as they will be heading to Monterrey to face Tigres.

I don't know how to put this, but I'm kind of a big deal: 'Chucho' Benitez

Chucho Benitez has probably been the most recognized goal scoring threat in Liga MX for the past several years. Despite this Cruz Azul played the Christina Applegate role and acted as if they had never heard of him before. In a matter of minutes, the Cruz Azul defense left Chucho unmarked twice. Both times Benitez was one-on-one with Cruz Azul keeper, Jesus Corona. Corona made a huge save (or more accurately a series of them) on the first attempt. The Cruz Azul defense refused to learn from this and allowed nearly the same play moments later. This time Benitez was able to find the back of the net. Also, he has many leather-bound books.

8:30 ET - Chiapas v Cruz Azul ... Chiapas have turned their season around a bit after a disastrous start. I want to be optimistic about Cruz Azul in this one, but it's not working. 1-1 draw.

10:00 ET - Atlas v Toluca ... Atlas have scored two goals in their last four matches; Toluca have scored three. They've each allowed four over that span. There won't be many goals in this one, if any. 0-0 draw.