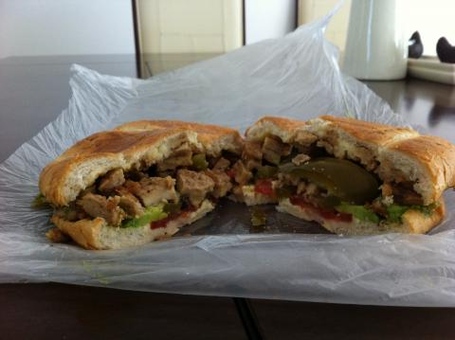 In honor of Tijuana's ascent to the top spot in the table, I went with the Frontera Torta (The Border Torta). As always, the headings are links to movie clips that (sometimes very loosely) allude to an aspect of this past week's results. Buen provecho.

That's How Winning is Done: Chivas

John Van't Schip clearly took a page from the Jurgen Klinsmann playbook and brought out the motivational speech for Chivas's road test against Leon. Either he played this clip from the newest Rocky movie or flew in Sly to deliver it himself. Neither would surprise me. Chivas were thoroughly manhandled by Leon for the majority of the match. Leon created a wealth of goal scoring opportunities but were unable to finish them. Chivas were also hit with several setbacks that made things much more difficult. They lost Marco Fabian to injury within the first minutes of the match. Xavi Baez received an absolutely ridiculous red card in the 33rd minute. If anything, Baez was fouled on the play. Down a man and without possibly their best player, Chivas kept fighting. Luis Michel had a great game in goal and Chivas were able to hang around. However, things looked bleak when Leon were awarded a penalty in the 73rd minute. Leon with a goal and man advantage and about twenty minutes remaining seemed to be a lock. But the tide turned dramatically in the final ten minutes. Leon received their own ridiculous red card in the 80th minute, leveling the sides again. Two minutes later, 'Chaton' Enriquez, once again, got his head on to the ball and scored the equalizer. Then, in stoppage time Rafa Marquez Lugo unleashed his aforementioned free kick into the corner of the goal. Van't Schip and Chivas need to get a ton of credit for this one. They had little reason to hope for a victory in this match, but they continued to work. Chivas teams of the past have been known to quit or commit silly fouls when they are down. They would need no excuses after this one. That's how winning is done.