Never in his almost 20-year coaching career has Luis Fernando Tena effusively celebrated his team’s goals. The veteran manager finally showed a bit of emotion at his team's most recent score, a goal from Oribe Peralta which proved to be the game-winner in Wednesday's 1-0 defeat of Switzerland. Peralta's strike helped Mexico earn a second straight group stage victory, as well as the top spot in Group B.

The Olympic TRI now joins Senegal, Great Britain, Brazil, Egypt, Japan, and Honduras as the final eight football teams in London 2012 vying for a medal. Three games separate Mexico from taking a huge step in its proceso for Brazil 2014.

Mexico's final group stage victory came against a Swiss team that finished in second place in the last Euro U-21 tournament in Denmark. Spain, led by Thiago, Adrián, Juan Mata, Javi Martínez, and Ander Herrera, won that tournament, wearing down Switzerland in the final by increasing their tempo as the game progressed.

The first half of Wednesday's match against Mexico saw a Switzerland team in desperate need to score. Goalkeeper José de Jesús Corona appeared more times with the ball than the Giovanis and Fabians. The defensive side of the pitch, guarded by Dárvin Cháves and Diego Reyes, appeared slippery and neglected. Stumbles from the Monterrey and Club America defenders allowed the Swiss to create great scoring opportunities.

Just as Jonathan dos Santos and Carlos Vela chose not to participate in the Olympics in order to solidify their present and future standing with their respective clubs, Xherdan Shaqiri, the former FC Basel star and new FC Bayern Munich signing, also opted to miss out on London’s third Olympics. With a Shaquiri on the pitch, Switzerland would likely have converted at least one of their first half attempts.

At the start of the second half, Tena’s side confronted the game with more composure. Aware of the Swiss team’s weak points, Javier Aquino, Giovani, Oribe Peralta, Marco Fabian, and Jorge Chatón Enríquez became a strong menace on the attacking end. Above all, though, it was Mexico's lanky, tall number 14 who led the team’s increasing tempo.

Chaton’s biggest enemy will always be Chaton. During last year’s Copa America, he made clumsy decisions while still managing to give sparks of his special skills. In the U-20 World Cup in Colombia, Enríquez was the captain, the loud voice on the field. He ultimately proved his worth by scoring a goal in the third place game against France. Wednesday's match with Switzerland again evidenced his category. Chaton demonstrated his ability to win every ball in the air, his tackles were on target, and his passes to the open space were always correct.

Mexico now awaits Senegal. The quarterfinal game will be held at the majestic and imposing Wembley Stadium. Against Senegal it will be crucial to dominate the game from the midfield. Even though Héctor Herrera has been one of the brightest players in the Olympic process, Tena and his staff should select the player that will give them more fluidity from the defense to the offense. That player is Enríquez.

The second crucial decision on the horizon is whether Giovani will be a starter against Senegal. During the last group stage match, Marco Fabian played on the left wing, with Giovani acting as Mexico’s number 10, playing behind Peralta. Fabian did not fail; he completed his main homework, to attack and defend, with an A+. London 2012 has not seen the best version of Marco, yet his optimistic attitude preludes more bright performances ahead. Miguel Ponce offers more on the defensive end, but gives no guarantees in the attacking third.

With these observations in mind, Tena’s possible line-up on Saturday against Senegal will be as follows: 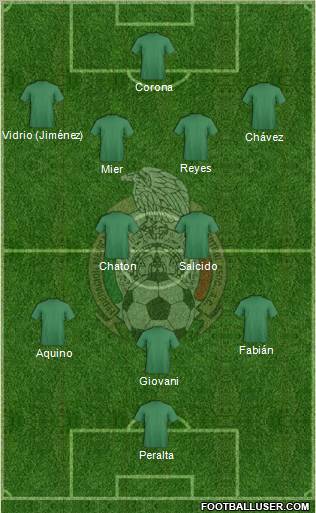 Mexico's Olympic future is no longer a quandary. The team comes to the sudden death games with a clean sheet, as well as a good idea of what must be done on the field to take home a coveted medal.