Share All sharing options for: Mexico 1-2 Japan: Lessons Learned From Another Pre-Olympic Loss

Witnessed by a unique crowd of Englishmen, all wearing sombreros and celebrating Marco Fabián’s rocket goal a la Lech Poznan and Manchester City (fans turning their backs to the field and jumping deliriously in celebration), Mexico culminated its Olympic Games preparation with a bitter 1-2 defeat to Japan.

Luis Fernando Tena and his staff have hit an unprecedented wall. They now have to find a way to motivate and prepare the team for the July 26th debut against South Korea after suffering consecutive losses. Looking closely at the Cádiz and Nottingham friendlies, Mexico’s level of intensity and confidence dropped severely between the matches on July 18th and July 21st.

On his Twitter account, Víctor Edú, director of Diaro Record’s tweeted – "Los refuerzos no han pesado y la defensa sigue mostrando fracturas. Lo más importante es que Gio, Oribe, Corona y Salcido carguen al TRI ya" (The reinforcements have not made a difference, and the defense continues to show weaknesses. What is more important is that Gio, Oribe, Corona, and Salcido carry al TRI now). Mexico is suffering critically on how to integrate "some" of these reinforcements into the current Olympic team. Corona and Salcido, who both have World Cup experience, provide a lot of balance to Tena’s team, but that is not the case with Giovani and Oribe.

The problematic circumstance of finding Giovani a spot in the starting eleven is deterring Mexico’s tactical scheme as opposed to strengthening it. Giovani’s skills, sprints, and decisions with the ball on his left foot are unquestionable, yet during these last preparation games on European soil, he has been unable to utilize them. Peralta, one of Mexico’s most in form forwards, is lagging and has become a bleak force on the "9" position. The injury he suffered prior to these preparatory matches could be one of the reasons for his sudden dip in form.

Even though Edú’s tweet has some truth, it is also easy to fall into the trap of suggesting the players with the "experience" should be the ones carrying the Olympic team during the London event. On the pitch there are 11 players, while on the roster there are 18 players. On the bench there are some members with long pants and blazers (which include Tena), and in the crowd, Chepo de La Torre will sit and take notes on the team’s pros and cons. The weight should not be carried by a selected few. Remember that these Olympic games are Peralta’s first major test as a professional footballer representing his country. 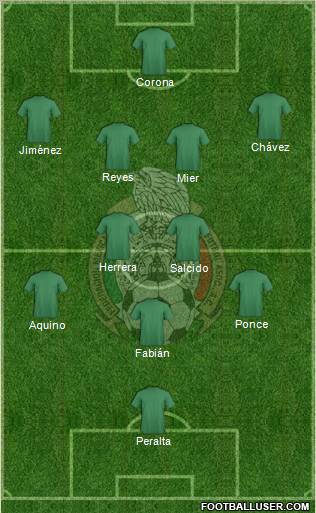 Giovani dos Santos’s name will likely not appear on the starting eleven, but there are two combinations that could permit his appearance in the lineup. If Javier Aquino’s injury is a severe one, Mexico’s number 10 could take his spot. The other possibility is replacing Oribe. If this occurs, Fabian will be Mexico’s number 9 and Giovani will play as a 10. On defense, Hiram Mier is a "sure" on Tena’s notebook.

One of the tweets from Daniel Gironès, a correspondent in Spain for Fox Deportes Latinoamérica, after the Japan match read as follows: "Estos dias fui testigo de la conexión @OficialGio (Giovani) @MarcoFabian_10 (Marco) fuera de la cancha esa conexión tiene que estar junta en la cancha" (These days I witnessed Giovani and Marco’s connection off the pitch, that connection has to be together on the pitch). Luis Fernando’s team is talented and capable of leaving a mark on London 2012, but the clock is ticking. During the Olympics it is not recommendable to try, but rather to execute.