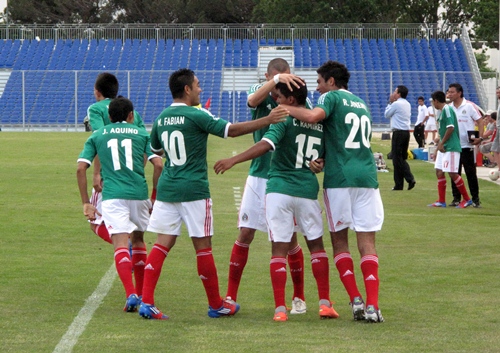 The Mexican U 23 national football team defeated the Netherlands and advanced to the final of the 2012 Toulon Tournament for the first time in their history.

Things didn't start out too good for México, as they were down 1-nil in the 10th minute after Ricky van Haaren scored the first goal of the match. Hector Herrera then equalized after a great first touch pass from Raúl Jiménez, dragging the Dutch goalkeeper out and scoring in a magnificent fashion.

Van Haaren then put the Netherlands ahead on the scoreboard once again after a unfortunate error by the Mexican defense.

But México didn't gave up hope and Cándido Ramírez from Santos Laguna made a superb play, taking on the Dutch defenders and chipping the ball over the Dutch GK.

Shortly afterwards, Raúl Jiménez scored after starting a nice play by combining with Cándido, before putting the ball in the back on net.

But México didn't say its last word until Marco Fabián scored his 7th goal in the tournament, tying legendary English international player Alan Shearer as the top goalscorer in tournament history, and making it 4-2 for México.

México is now facing Turkey, who defeated the hosts France 1-nil, in the final of the Toulon Tournament.

Tena's boys are on the verge of making history at the Toulon Tournament. Congrants to them.

They reached the final of the tournament for the first time in their history and now they have the chance to win it all and achieve an important confidence boost for the Olympics.