Mexico vs. Wales: De Nigris Shows His Knack for Goals

Share All sharing options for: Mexico vs. Wales: De Nigris Shows His Knack for Goals

Late May humidity, beaming sunrays, and a Memorial Day weekend feeling of unbothered joy, welcomed Chepo de La Torre to the kickoff of his second summer as Mexico's head coach. El Tri began the summer season on Sunday at MetLife Stadium in New Jersey, with a convincing 2-0 victory over a Wales squad sans Gareth Bale.

A Francisco Javier “Maza” Rodriguez as captain, an electric but a bit off-target Giovani dos Santos, a mature and reliable Severo Meza, an explosive but at times slow Pablo Barrera, and a dependable and confident Aldo de Nigris were some of the notes from Chepo’s 4-4-1-1. 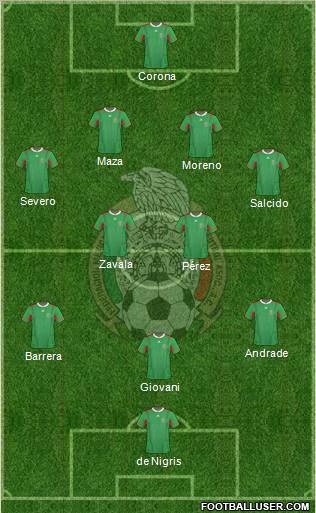 Édgar Andrade, a player who has made a remarkable turnaround in his career after suffering a serious leg fracture on Estadio Azul’s pitch in 2007, continued to impress. Andrade had the opportunity to showcase his abilities on the left flank, a spot in the starting line-up traditionally owned by Andres Guardado.

Andrade, in the first half, managed to take shots on goal (some better than others), and in the second half one of his crosses into the box led to Aldo's second score. The Jaguares’ midfielder needs more opportunities to build confidence and determination, two things of which Ángel Reyna already possesses wearing the national team colors.

Reyna came in for Giovani dos Santos, who in seventy minutes on the pitch showed glimmers of the class he has inherited from his years at La Masia. Ángel, one of the six Rayados on Chepo’s squad, came in immediately asking for the ball, appearing on every play on the attacking end, measuring the paces of teammates, and providing the correct pass. Little by little it is Reyna, the last Mexican football player to win the goal scoring title as member of Club America, who is turning himself into a legitimate primary option for the 2014 World Cup squad.

The situation of the holding midfielders is perhaps the biggest question mark. Not because there are not enough players to fulfill expectations in the spot, but because there is not a player yet that can be considered the bastion -- like what Xabi Alonso is to Vicente Del Bosque’s Spain, or Steven Gerrard will be to Roy Hodgson’s England. There are quite a few names, and Zavala, with no doubts is a current front-runner. The big moment for Jonathan dos Santos may also be right around the corner.

At the right back position, Severo Meza completed an excellent game. His play included a perfect cross into de Nigris, which gave Mexico its first goal. Prior to South Africa’s World Cup, Efraín Juárez, played excellent games against the United States and Costa Rica and consolidated his name on the starting eleven. Something similar could happen with Severo, but the road to Brazil has yet to enter the World Cup qualification stage.

The additions of Chicharito, Guardado, and Gerardo Lugo should be interesting to follow. Consolidating the team spirit between the players, who are in Europe and those who play in the Mexican League, should be Chepo and his staff’s main objective in this mini summer camp.