Mexico U23 vs. Morocco: Marco Fabian's Hat Trick A Sigh of Relief for El Tri

Share All sharing options for: Mexico U23 vs. Morocco: Marco Fabian's Hat Trick A Sigh of Relief for El Tri

Surrounded by a construction site, a huge McDonalds sign, and closely followed by the French passersby, Mexico began its countdown to London 2012 with a rollercoaster 4-3 win over Morocco on Thursday in the Toulon tournament. Manager Luis Fernando Tena’s starting line-up looked as follows: 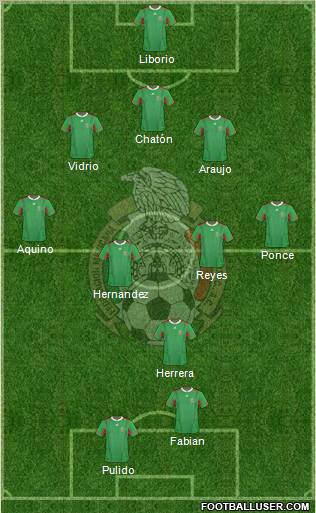 Throughout the match the team interchanged the formation of the defense. On repeated occasions, in an attempt to stay well-organized in the back, a line of five assembled. This brought Miguel Ponce and Javier Aquino back to unite with the three central defenders – Nestor Vidrio, Jorge "Chatón" Enriquez, and Nestor Araujo.

At other points of the match, when the team fully propelled forward towards the attacking end, the formation transformed into a 3-4-3. This allowed Javier Aquino and Miguel Ponce to become the bastions on the wings, and the consummation became so contagious that on more than one occasion Vidrio, Enriquez, or Diego Reyes would end up in the attacking third.

Hector Herrera’s ability to easily sway in through the left flank – cutting in and then out, and crossing the ball in with his right foot – managed to torment Morocco’s defense throughout the first half. Alan Pulido and the in-form Marco Fabian had the challenge of cutting through the open spaces, which ended up leading to all of Mexico’s goals.

Ending up with a last minute victory (due to a late Morocco penalty), could mean one of two things for Mexico: Either both teams truly played a memorable game, or Mexico could not fully take advantage despite outplaying their opponent.

Mexico clearly confronted the second option. The damage was mostly self-inflicted, with goalkeeper Liborio Sánchez the main victim, as well as at certain moments the defense. As Marco Fabian hammered in his hat trick, Liborio shouted and released all of his agony.

Perhaps Liborio could have done better on the first and second of Morocco’s goals, but at the same time these preparation games are held to see how much pressure the players are able to handle. Liborio, certainly, has to recover and show more confidence on goal. If not, Tena will have to recruit an Ochoa or a Corona for London.

Two players that at moments erratically defended and gave the ball away to the adversary, surprisingly, were Reyes and Chatón. The two players have uncommon characteristics as Mexican midfielders – both are tall, lanky, and for the most part are able to distribute the ball accurately.

In the first goal, Chatón was displayed, as he easily gave in to Morocco’s forward gambeta. Reyes, also, at times was easily beaten on one-on-ones. The average game from these two matured and experienced young players (both participated in Copa America), is worrisome. But on more than one occasion they have shown the ability to recover from a game that saw them make bad decisions.

Mexico’s U23 superstar has a name and that is Marco Fabian. His speed is treacherous, his shot rockets, and his hunger devoured the Morocco national team. But the team as a whole continues to be in the process of formulating a cohesive style – one which will allow them to be strong at both the attacking and defending ends. The journey to London 2012 continues as Mexico plays against France on Saturday.