Sevilla Anecdotes: Andres Guardado and Leaving Behind a Legacy in La Coruña

Share All sharing options for: Sevilla Anecdotes: Andres Guardado and Leaving Behind a Legacy in La Coruña

FMF State of Mind's Nayib Moran reports from Spain with an update on Andres Guardado, currently playing with Deportivo de La Coruña in the Segunda Division.

Guardado goes through his warm up in quiet, moving at a pacific pace, stopping only to holler once or twice to Laure, his partner in crime on the right flank. His sight is pure concentration, rarely getting distracted by the trainer’s effusive instructions. His team, Deportivo La Coruña, is a first division side playing in the second division.

Minutes after the start of the game (and a minute of silence for the Port Said Stadium’s victims in Egypt), El Principito and his teammates were already controlling the pace of the game. With excellent first touch in the midfield, combined with Recreativo’s poor passing, Deportivo took possession and pushed the ball forward.

As the 15th minute approached, the first and only goal of the game arrived. The play began with a great through pass from Deportivo’s Portuguese midfielder Salomao to ex-Boca Junior Morel Rodriguez, who sent a laser into the box. The excellent cross found Riki, whose header was blocked by goalkeeper Manu Férnandez. The ball landed perfectly at Juan Carlos Valerón’s prodigious right foot, and he gently positioned the ball close to Manu’s right post, leaving the stadium quiet.

Guardado, from the first minute, attempted to control the game from the right flank. His movements on the flank permitted Valerón to release the ball immediately. Valerón, who is 36, does not posses the speed that Salomao, Guardado, and Riki possess, so it is crucial for these three to find open spaces. Once open, surely enough, they receive sweet passes from Deportivo’s captain.

Without a doubt, Valerón is Guardado’s teacher; their understanding on the pitch is sublime. More than once, their one-two passes created fear amongst Recreativo’s back four. El Principito has all the liberties from Oltra to appear on any part of the pitch.

In the 80th minute, after Valerón and Riki’s substitutions, the captain’s armband rested on Guardado’s arm. Wearing black gloves and a short-sleeve jersey, El Principito took all of Deportivo’s free kicks and corner kicks. His confidence is seen in his pace; he gives more than 100 percent to a team, whose fans questioned his love for it.

Andres is Deportivo’s top goal scorer with 8 goals. If he leaves Deportivo in the summer, he will leave a mark.

The game finishes, Guardado approaches Diego Colotto, a bastion on the central defense, they high five and break a joke about the game. He was the last one to enter the pitch during the warm ups and was the last one to head to the locker room. The hard fought victory leaves Deportivo on top of the standings with 48 points. Chepo and Mexico know that in Guardado they have a leader for Brazil 2014. 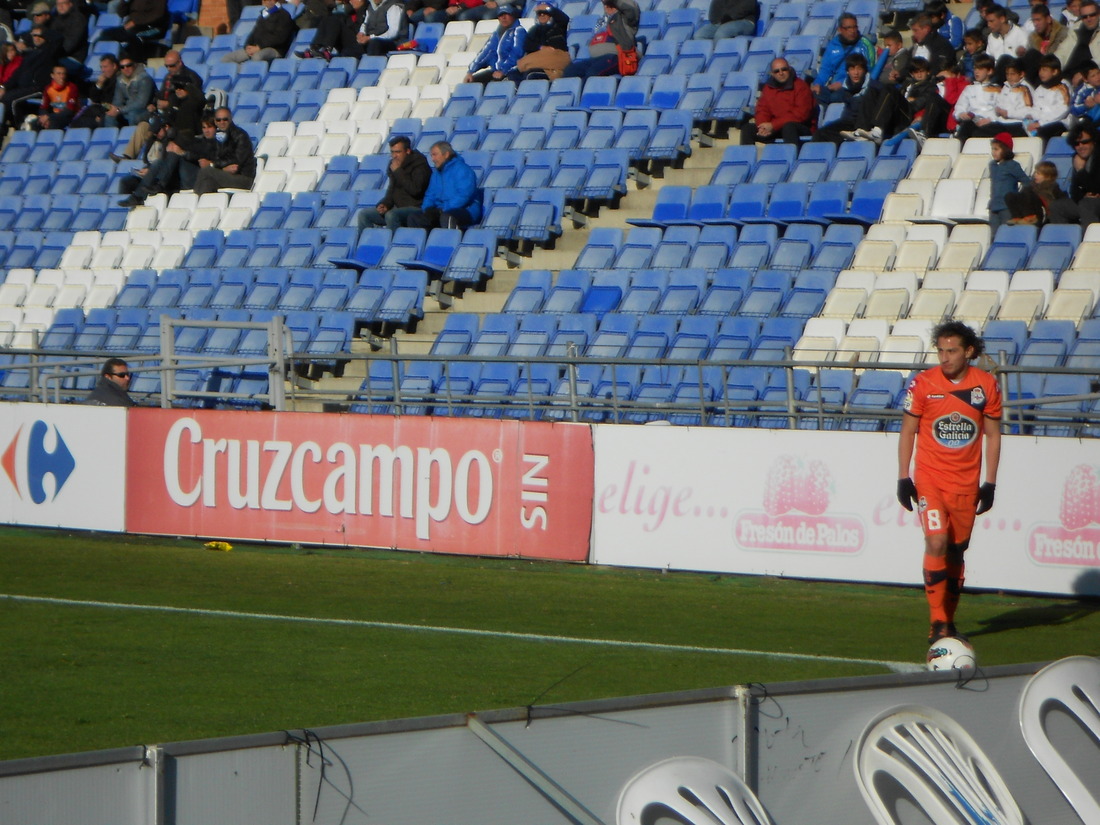 Writers’ Note: Special thanks to Rubén Lorenzo Márquez for taking me to Huelva. Having new friends like him, who will become friends for life, makes the experience abroad a million times better.