Are Rafael Márquez and Nery Castillo Safe Bets for Leon?

Léon was one of the most exciting football teams in Mexico last season. Will the arrivals of Rafael Márquez and Nery Castillo affect the team's positive existing chemistry?

Share All sharing options for: Are Rafael Márquez and Nery Castillo Safe Bets for Leon?

Club Léon FC took fans in Mexico on a surprising ride through the Apertura. The club shocked everyone by finishing amongst the top four teams in Liga MX, and just 90 minutes away from reaching the final. After spending the last ten years in second division play, Gustavo Matosas’s team enamored football spectators with a high possession game. Leon was led by a group of players like Carlos “Gullit” Peña, Luis Montes, Hernán Burbano, and Eisner Loboa, who all played their hearts out in every match.

The team from Guanajuato now makes a huge splash in Mexico’s current transfer market. The arrivals of Rafael Márquez and Nery Castillo are big and bold moves for this promising and up and coming football team. The lingering question, though, is will Márquez and Castillo mess up the perfect camaraderie as opposed to improving a team that will play in its first Copa Libertadores in 2013?

Márquez escaped the MLS after not managing to make New York City his new Barcelona. He came back to the Americas at a moment in his career when he still possessed the sufficient capabilities to make it big in another European League. He instead decided to come to the United States to make an impact and lead the MLS to better times. In his case that was not fulfilled.

Castillo came to Pachuca last season as one of Hugo Sanchez’s most coveted acquisitions. The player who has had his brightest football moments in two foreign countries – Greece and Venezuela – arrived in Mexico with the desire to impress Jose Manuel de la Torre and earn a national team call up. In the Apertura, the 28-year-old managed only one goal. He made the cover of newspapers instead for his off the pitch acts, such as insulting Jorge Vergara.

Rafa and Nery are now two players that come to Léon with numerous question marks surrounding them. Their contributions are unknown. The following line-up is the last one Gustavo Matosas set up in Estadio Caliente, where La Fiera lost 3-0 against the Apertura champion Xolos. 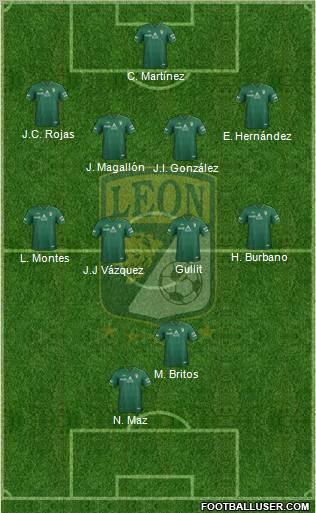 Could Márquez play alongside Magallón, or alongside Gullit? The Kaiser of Michoacan is a natural central defender who in the latter part of his career played the holding midfielder position. Rafa believes he is able to make it to another World Cup and will ask Matosas if he could play his natural position, central defender.

With Castillo, the story is different. Of the two, he has the smallest chance of winning a starting position. He will have to prove to Léon and Matosas that he is able to play top-notch football in Mexican territory such as he displayed in Greece and Venezuela.

Léon will play Libertadores with a capable coach in Matosas, with a talented and deep roster, and with a fantastic fan base. The table is already set, but the lurking question is will Rafa and Nery live up to their own expectations? If they do, the benefits will play out not only in Léon, but also possibly on Chepo’s TRI.