Jornada 12 recaps with Jornada 13 previews all sandwiched together with delicious movie clips. 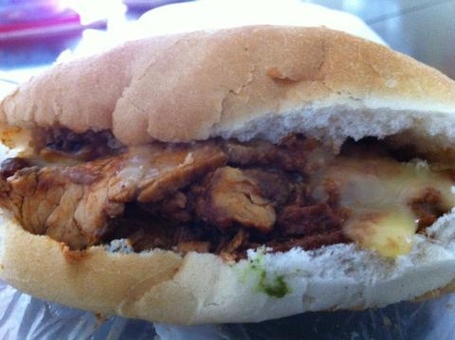 The Clasico dominated the hype and headlines of the weekend. Surprisingly, it actually lived up to its billing. It was an entertaining match with plenty of back and forth action. This week's Torta Tuesday features a bunch of clips from Snatch and plenty of Chivas. In honor of Guadalajara's victory, I tried to acquire a Torta Ahogada, in true Tapatio style, but all my usual torta spots claimed they didn't have them. Sounds like an Americanista conspiracy to me. Either that or my poor language skills caused the problem. I say conspiracy. Speaking of language, predictably most of the clips included this week probably wouldn't be great to play in the office. By the way, this Lomo Adobado torta is making me not care about how it relates to this week's results.

America 1 - 3 Chivas ... Big win for Chivas in the Clasico. Not quite a dominant performance, but definitely some great individual performances. More on that later.

Tigres 1 - 2 Puebla ... At the beginning of the season, Puebla was giving off vibes that they would be challenging Queretaro as the most inept team in Liga MX. They are certainly no where near that now.

Pachuca 1 - 1 Leon ... This was a really strong performance from Pachuca. Both teams had enough clear chances to take the win, but neither could finish them.

Queretaro 1 - 1 Santos ... Everything is not right with Santos. They were probably lucky to secure a draw in this one (against Queretaro?!?).

Atlas 1 - 1 Cruz Azul ... Plenty of chances for each team. The stiff Cruz Azul defense looked a bit flimsy at times in this one.

Pumas 3 - 2 Monterrey ... Pumas with three goals from four shots on goal. Not a stellar day for Monterrey.

Chiapas 4 - 0 San Luis ... The score line is an accurate measure of the ugliness that was this match. San Luis was absolutely demolished in Chiapas on Sunday.

Atlante 2 - 2 Morelia ... Atlante lead 2-0 after 17 minutes and took that lead to the 83rd minute. I believe this qualifies as a stomach punch draw.

Tijuana 1 - 0 Toluca ... Tijuana wins the battle for table supremacy. Riascos scored the lone goal in the 51st minute and then Sinha received his second yellow in the 74th. Game over after that.

Who's the big winner?: Hector Reynoso

In complete honesty, I'm not Reynoso's greatest supporter. I've seen him play so poorly at times that I've questioned his presence on the field. As the Chivas captain, his leadership abilities are often referenced. However, this has been a squad that, by all appearances, has been lacking in leadership.

All of that being said, this week's winner is well deserved. Reynoso played a wonder-game in the Azteca on Saturday. He was vital in stunting the potent America offense, and made the save of the match with a diving foot stop in front of an empty net. As America's manager, Miguel Herrera so eloquently pointed out Chivas won with "huevos" in this match and not due to anything John Van't Schip has done tactically. If you are winning with heart (I decided to go in that direction), surely the captain should garner some credit for that.

Where would Chivas be without Rafa Marquez Lugo? Not in a position to qualify for the playoffs, which looks like it may be in the cards for Chivas now. Marquez Lugo scored two of Chivas's three goals. He continues to net clutch goals for his team in the toughest of environments. His 90th minute winner in Leon was an absolute golazo. His two at Azteca this weekend were pretty impressive as well. Both goals were scored from distance. The first took a fortunate deflection off Diego Reyes to beat America keeper, Hugo Gonzalez. However, the second one saw Marquez Lugo put a move on Reyes to give himself some space. Apparently, you can't give him any space, because what he did with the ball was a thing of beauty.

Read the rest at Soccer Mexicana.