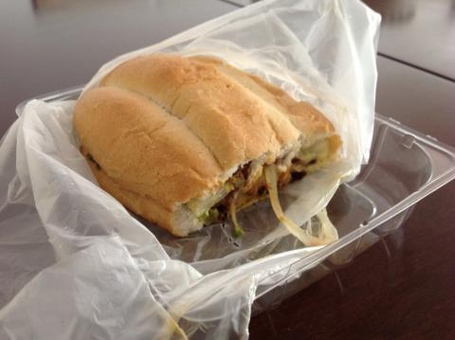 I decided to go with a Polynesian Torta this week for no other reason than its inherent deliciousness. This weekend's matches were quite good as well. We don't have too much time to relish in their loveliness however - Jornada 11 starts tonight. To aid in digestion, be sure to click on the header links for some semi-related movie clips. Buen provecho.

Chiapas 1 - 0 Cruz Azul ... I won't be the whiny Cruz Azul fan any more. I will only say that a Cruz Azul player scored the only goal of the match (in to the wrong net).

Leon 2 - 0 Monterrey ... Leon took target practice at Jonathan Orozco in this match. Orozco held up pretty well, but with the sheer volume of shots a few were bound to go in over time.

America 1 - 1 Morelia ... Kind of an "eh" match. Nothing super impressive from either side. A draw was a a fitting result.

Queretaro 0 - 1 Tijuana ... Tijuana were down to ten men early in the second half. It didn't matter.

Tigres 0 - 0 San Luis ... Not to get all "I told you so" about this, but I'm just so happy I finally got something correct. I may throw myself a parade. Anyway, this was more of a solid defensive effort from both teams than failing offense.

Atlas 1 - 3 Toluca ... Toluca continues to impress. Maybe they really can do something in the playoffs.

Pumas 2- 1 Puebla ... An uninspired performance from both teams in the first half. Pumas came out for the second on fire and took control of the game. It's unclear if Puebla ever made it out of the locker room from halftime.

Atlante 1 - 3 Santos ... Not a lot of great defending on display in this one. Plenty of chances on each end.No Esteban Paredes for Atlante means they convert fewer of their chances.

Who's the big winner?: Enrique Meza

Road wins are always great. They're even better when they secure your spot at the top of the table. Toluca traveled to the Estadio Jalisco and dropped the boom on Atlas this weekend. Scoring three in any match is impressive, but even more so against the stout defense of Atlas. Meza ended last season being sent out of Cruz Azul to a shower of trash. Now he is sitting on top of the table with Toluca. The turnaround was indeed severe, but it appears as if it may last.

The midfield combination of Wilson Tiago, Lucas Silva, and Antonio 'Sinha' Naelson creates a solid formation of stability for Toluca. Their wins are anything but fluky and their play remains consistent. With big road wins like this one, they seem to be staking their claim as serious title contenders. The icing on the cake for this match ... Meza gets a win over his nemesis, Tomas Boy. Always a good thing.

Chivas have had a rough go of it the last couple of weeks. On the pitch, they aren't getting the results they need and off of it they are locking players out of their training grounds. John Van't Schip was undoubtedly taking over a tough situation when he agreed to become the Chivas manager. The owner isclearly insane. Fan expectation continues to be at the highest level even though results haven't followed. The locker room gives off a real fried chicken and beer clubhouse kind of a vibe. As managers have been fired with every cycle of the moon, there has been a complete lack of consistency in direction. Van't Schip, under the guidance of Johan Cruyff, have assumed a difficult task.
That being said, in addition to all that he has to deal with, Van't Schip may need to get creative when it comes to his team instruction. Chivas have dropped a likely four points over the past two weeks by way of missed penalty kicks near the end of matches. Like shooting free throws, more practice doesn't necessarily translate into a better conversion rate. This is especially true in high pressure situations, like the end of a game, where they are very much do or die. They can take on more of a mental aspect. Hence, Van't Schip may need to look to Mr. Miyagi for inspiration. Perhaps he could find a way to break down the steps of taking a penalty kick successfully into menial tasks around the training grounds. Perhaps they can flatten aluminum cans or tightly secure door jambs. Van't Schip-san could probably figure out something better.

There were plenty of great goals to choose from this week. On any other week, Sergio Napoles's strike (at the 3:00 mark) for Atlante would be the one singled out, but there's too much competition this week. The two goals that Leon scored were pretty incredible. The hard angle and sheer power of Hernan Burbano's goal were impressive, but the top prize goes to Luis Montes this week. Admittedly, I'm a sucker for the volley. Montes came at the ball with pace and struck it perfectly into the corner. But with the difficulty of the shot aside, the build-up to the goal was well executed also. Leon earned a great victory at home over Monterrey and it was plays like this that typified their performance.

He'll be alright in a couple of minutes: Aldo Polo

Aldo Polo came on for Puebla during the 85th minute of his team's losing performance against Pumas on Sunday. Normally he would not get much mention along with the highlights of the week's action, but I feel that his performance deserves some special recognition. Polo was highly efficient with his playing time. Within a minute of being on the pitch, he got in a harsh challenge on Martin Bravo, received a yellow card, and got a swift kick to the head. It was quite a welcome to the match.

8:00 ET - Chivas v Tigres ... I keep thinking Chivas are on the verge of turning things around, but they continue to find ways to lose. I'm off the bandwagon. Tigres win 1-0.

9:30 ET - San Luis v America ... San Luis are doing more with much less than most teams. This is a bandwagon that I plan on riding out. San Luis wins 2-1.

9:00 ET - Santos v Atlas ... The one thing Atlas had going for them was their ability to keep the score low. After giving up three to Toluca this weekend, I can't pick against them fast enough. Santos win 2-1.