One Eye On Brazil: Mexico Faces Final Qualifiers of the Year While Looking Towards 2014

As Mexico's year comes to a close with two final matches against Guyana and El Salvador, manager Chepo de la Torre begins to plan the team's strategies looking ahead to Brazil 2014.

Share All sharing options for: One Eye On Brazil: Mexico Faces Final Qualifiers of the Year While Looking Towards 2014

Mexico is on the verge of walking into the hexagonal with a perfect 18 out of 18 possible points. The profound work ethic integrated by Chepo and his staff since he took charge in 2011 is fully establishing itself. Months away from entering 2013, Chepo now begins to look ahead, organizing what will be Mexico’s 23 man-roster for Brazil 2014.

During the last pre-hexagonal, Sven-Goran Eriksson worked more on his Spanish and eating Mexican cuisine than planning for the South Africa 2010 World Cup. A Matias Vuoso goal in the dying minutes against Canada saved Mexico from an unprecedented early elimination. Instability was a common word not stability.

Mexico arrived in Houston early to prepare for the last two matches. Debates on whether to bring the players playing in European leagues were prevalent as Mexico cruised through its first step towards Brazil 2014. Chepo was adamant and made clear that his best men would show up for these matches. Although that is not totally the case as Carlos Salcido and Jose de Jesus Corona receive some rest, after playing fundamental roles in the memorable London 2012 achievement.

Antonio Naelson "Sinha" and Gerardo Torrado are two call-ups that raise eyebrows. It is fundamental to understand their Mexico returns and not misinterpret what they provide to Mexico’s current increase of notoriety. What the Toluca playmaker brings to the pitch is a player that is capable of fulfilling Giovani dos Santos’s role. Mexico is a team that likes the number 10 figure, playing behind the number 9. Such was the case in London as either Giovani or Marco Fabian played behind Oribe Peralta.

Gerardo Torrado’s call up is more complicated to comprehend. If there is an area on the field that needs rejuvenation for Mexico, that area is the holding midfielder position. Torrado brings to Chepo’s team another leader but does not solidify the position in the years to come. Jesus Zavala’s injury and Jesus Molina’s drop in form opens the door to Jorge "Chaton" Enriquez, Hector "Mexican Ribery" Herrera, and Carlos "Gullit" Peña. Chaton and Herrera are known talents, who have proven themselves as they overpowered a Brazilian Olympic midfield composed of players such as Sandro and Oscar. El Gullit is a question mark. His strong Leon breakthrough has made him an interesting prospect, yet his composure representing the national team is unknown. Playing time for Peña, Herrera, and Chaton is more important than Torrado getting minutes.

On the forward position, Javier "Little Pea" Hernandez and Oribe Peralta fight for the spot. The experiment of playing both on top decreases Mexico’s counter factor. So with these notes on mind, the starting line-up at Dynamo’s BBVA Compass Stadium will look as follows (Maza and Meza have reported minor injuries): 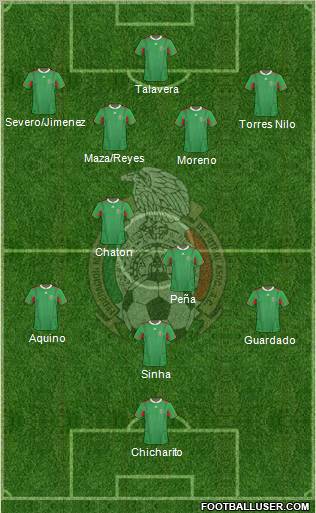