Share All sharing options for: Torreon Welcomes Brazil Ahead of Tuesday's Friendly

The samba circus has come to Torreon.

It's not just the yellow Brazil jerseys that have brightened the city. Smiles and excitement from the local population are only increasing as we move closer to game time. The city of Torreon has been building in anticipation all weekend, ready to explode on Tuesday night as Mexico takes on visiting Brazil at Estadio TSM Corona.

Mexico vs. Brazil is certainly the main event, but the international friendly match is just the culmination of a weekend packed full of notable ceremonies and celebrations. In the four days leading up to Tuesday's match, Torreon locals have been treated to a festival of activities. The area around the TSM Stadium has featured concerts, football clinics, beach volleyball courts, wresting rings, youth activities, loads of food, and much more.

It's a welcome scene in a city that has more recently been the subject of negative attention in the international press. Once a crown jewel along Mexico's northern region, Torreon has seen a sharp increase in drug violence in recent years. As the Zetas and Sinaloa cartels have battled for supremacy in the city, violence has increased exponentially. In August, a match at Estadio Corona between Santos Laguna and Monarcas Morelia was suspended after a shooting occurred outside the stadium.

This week has been a chance for the city of Torreon to show a different face to the world. A positive face that represents the true Torreon. That face is a smiling one, delighted with the prospect of world-famous Brazil coming to this small pocket of northern Mexico.

"I don't have words to describe what it is to see the Brazil national team in my own little town," Torreon resident Fernando Cisneros told me.

On Sunday evening, Cisneros accompanied thousands of other local residents to a training session for both teams. It may have just been a training session, but Cisneros could clearly see Torreon's excitement level beginning to peak. "Today for the first time the city felt like something big is about to happen. Today it felt like there was something special in the air."

Sunday's training at Estadio Corona was open to those with tickets to Tuesday night's match, as well as Santos Laguna season ticket holders. Thousands were on hand as Brazil entered the stadium. Huge cheers went up for Ronaldinho and Neymar, the latter delighting the fans near the field by signing several autographs.

The Brazil training session included a brief intra-squad scrimmage. The first team lineup during training featured Jefferson, Dani Alves, Thiago Silva, Marcelo, David Luiz, Lucas Leiva, Fernandinho, Lucas, Hulk, Neymar, and Ronaldinho. After the scrimmage, Brazil finished up training by firing some additional shots at Jefferson, who will be filling in at goalkeeper for the injured Julio Cesar.

As the time approached for Mexico's training period, fans continued to pour into the stadium. As the El Tri players entered the field a massive cheer went up for Oswaldo Sanchez, goalkeeper for the hometown club Santos Laguna. As expected, an even louder noise -- the biggest cheers of the night -- greeted Chicharito as he stepped into the stadium.

Not all the Mexico players received cheers, though. Guillermo Ochoa was met with loud boos as he took the field. It was a greeting that literally added insult to injury. Ochoa tweaked his ankle in a previous training session and was visibly limping on Sunday. On Monday it was announced that Ochoa would not dress against Brazil, and that Alfredo Talavera would be called in as his last-minute replacement. It now looks even more likely that Oswaldo Sanchez will get the start in goal against Brazil, something sure to delight the hometown Torreon fans.

Despite the festival atmosphere, security still remains a concern in Torreon. Federal police -- including a helicopter circling the stadium -- were out in full force on Sunday. Local and federal authorities have assured the public that every precaution will be taken to protect those at Tuesday's match and any surrounding events from even a hint of violence.

Overall, Torreon has certainly done their best to make this feel like a world-class event. And with Brazil coming to town, that's exactly what it is. With the positive atmosphere on full display you could say that no matter who wins or loses on Tuesday, the people of Torreon -- and Mexicans nationwide -- will have a reason to celebrate. 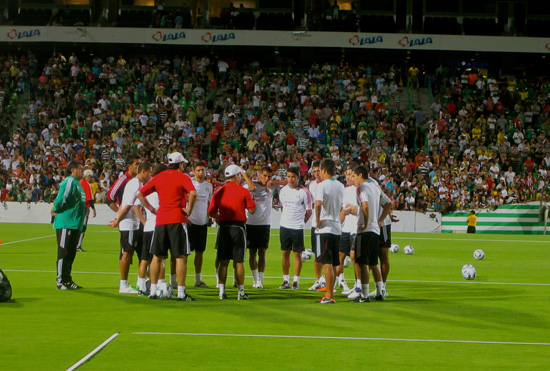